An Artist in Wartime

The devastating impact of World War Two on Coventry has been well-documented.

Less familiar is the part the city's women played during this conflict. The work of female war artists has also been overlooked but Laura Knight brilliantly captured the contribution of women to the war effort and the defence of Coventry.

By the outbreak of war in 1939, Derbyshire-born Dame Laura Knight (1877-1970), was an established artist, arguably better known than her husband, fellow artist Harold Knight, and was famous for painting ballet dancers and circus acts. She was also the first female artist to become a full Royal Academician since Angelica Kauffmann and Mary Moser in 1768.

Used to working in a male-dominated field, Knight was employed by the Ministry of Information and awarded commissions by the War Artists Advisory Committee, led by Sir Kenneth Clark, then Director of the National Gallery. 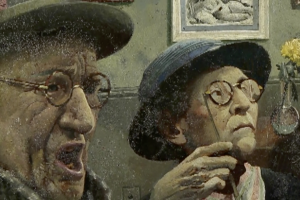