Precursor to The Great Exhibition

According to Elihu Burritt: 'Such an aggregation of mechanical products was unknown until it was presented in Birmingham…It was here that Prince Albert not only got the idea but practically the model of what was produced in the Crystal Palace’ (Walks in the Black Country, 1868).

Elihu Burritt was not alone among nineteenth-century commentators in bestowing the Birmingham Exhibition (or Exposition) of Manufactures and Art with such significance. Henry Cole in the Journal of Design and Manufactures (JDM), Samuel Timmins’ 1866 Birmingham and Midland Hardware District and Robert Dent, in his 1880 and 1894 histories of Birmingham, all recognised this little-remembered event as the forerunner of the famous exhibition of 1851.

The Exhibition was open to the public from 10am to 10pm daily from from 3 September until 15 December 1849, attracting more than 100,000 visitors. Admission cost 1 shilling (5p) or 5 shillings for a season ticket. It was held in connection with the British Association for the Advancement of Science’s second meeting in the town (the first was in 1839, for which a much smaller exhibition was organised). Charles Darwin and the celebrated engineer Robert Stephenson were among those connected with the Association who visited the Exhibition. 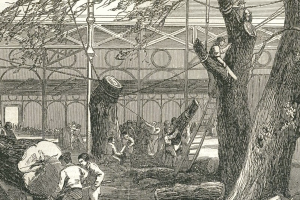