All printed maps originate in manuscript form. In order to produce a printed version, the map is transferred, in reverse, onto a copper plate by incising it. Every printed map is a mirror-image impression made by the transfer of ink from a unique incised copper plate. Later versions produced from the same plate are identical unless alterations have been made. Features can only be removed by hammering the plate from behind and rubbing the relevant part of the engraved surface until the soft copper spreads out, removing the incised lines. Both removal and any new engraving are irreversible. Every subsequent version will automatically include the alteration, unless it is later reworked.

It is naive to assume that if map publishers had access to the latest geographical information they would automatically incorporate it into new versions of their maps without delay. As altering a plate cost money, publishers of early maps tended to make changes as infrequently as possible, and then only because it made commercial sense. Many publishers failed to respond even to major changes in the geography of a town.

Most commonly, alterations to a printed map were of either the date, so that the map appeared to be topical; the publisher's address, for advertising purposes; or minor additions of
topographical detail that required little if any erasures. Not dating the map in the first place avoided the problem of topicality which is why so many are undated. Where only one copy of a new version of a map was required, manuscript additions could be made to an existing printed version of the map without any change to the copper-plate.

Very few original copper-plates survive. As copper was a valuable raw material it was usual to melt down and reuse plates which were worn or carried out-of-date
information. 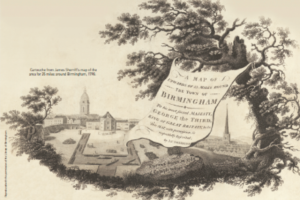