How industrial pollution affected the lives of Black Country folk

He talks to Dr Janet Sullivan, Honorary Research Fellow at The University of Birmingham who has made a unique study of the impact of the industrial revolution on the health of the people of Oldbury. She has revealed how what we now know as “acid rain” regularly fell on the town and how the water supply was poisoned by 150 000 cubic yards of toxic waste in “Blue Billy” next to the river.

While many employers recognised some of the implications of pollution, no-one really understood its consequences or how it could be controlled. Some believed that toxic fumes could effectively be stopped by paling fences and others argued that taller chimneys would overcome the problem of pollution; not realising that it just moved it to the next town.

Meanwhile, for decades children died while workers were disfigured and crippled by handling the toxic chemicals used in industries such as glassmaking. 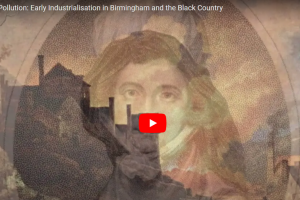 Perceptions of Pollution: Early Industrialisation in Birmingham and the Black Country