Hereford Cathedral is notable for a number of things, amongst them its world-famous Chained Library and the triennial Three Choirs Festival, but perhaps the cathedral’s most famous treasure is its medieval mappa mundi.

This fascinating map, showing a Western Christian perception of the inhabited world in the Middle Ages, was added to the UNESCO Memory of the World Register in 2007 and is now displayed in a purpose-built exhibition at the cathedral. The map describes a world where the cities of Christendom stand next to the wonders of Classical Antiquity, and where strange beasts and deformed races dwell in far-away lands.

This is a place inhabited by dragons, unicorns and giants, but it is also a realm whose pivotal focus is the crucifixion. A circular diagram depicting Jerusalem marks both the geographic and figurative centre of the map, and above Jerusalem an image of Christ crucified rises like a cross on an orb.

Today the map is faded, yellowing, and in places indistinct, but in its own time, newly drawn and vibrant with colour, it would almost certainly have seemed to its medieval viewers to be a truly stunning representation of the world’s geography, ethnography and history. But as well as this, and importantly, it showed the spiritual destination of humanity. 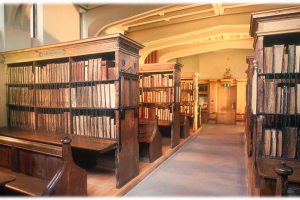